On October 20th, on the fifth floor of Cuppage Plaza, 180 excited ladies were lining up in two endless lines of neat shirts and orange ties. With their high heels and trendy hairstyles, there was no way to be mistaken: these were the 180 Aidha graduates and the celebration was just about to get started.

This year, Aidha celebrated its largest batch of graduates ever. Their proud march into the Nexus auditorium was simply glorious and, even after the graduates were seated, the long and heartfelt applause did not want to stop.

Graduates eagerly waiting for their turn to enter the auditorium with their heads held high and proud!

Ms. Ting Claravall, the master of ceremonies, set a great mood right from the start. “Today is YOUR day!”, she proclaimed, and went on to dedicate the ceremony to everyone who made Aidha great over the past ten years: donors, volunteers, employers, the board of directors and last but obviously not least: the students and their families.

Ms. Ting Claravall welcomed the attendees and the graduates with her wit and charm

In her Welcome address, Aidha’s CEO Ms. Jacqueline Loh took some time to reflect over the past 10 years. In 2006, Aidha’s pioneers started off with 23 students. Since then, Aidha has reached truly impressive peaks of 600 enrolled students and 180 graduates in one year. Ms. Loh’s enthusiasm was shared by the guest of honor, the Third Secretary and Vice Consul of the embassy of the Philippines, Ms. Laarni Gendarosa, who greeted the students in four different languages and confirmed the embassy’s unconditional support of Aidha’s current programs and future plans. 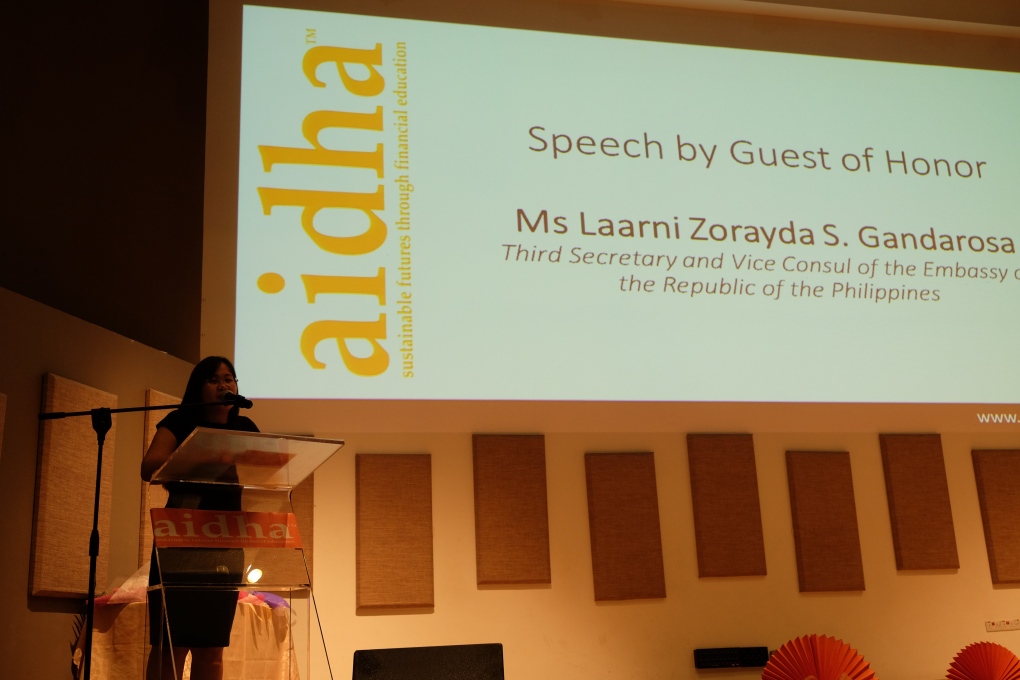 Ms. Laarni Gandarosa speaking about how proud and supportive the Republic of Phillipines is of the Aidha students

It was then Ms. Nilushika Hettige, Aidha’s former graduate and current business owner, entrepreneur and book author, who carried away the whole audience with a breath-taking keynote speech. Despite the difficult circumstances of her youth, this wonderful and inspiring woman found the strength to rise up, find her way through society and make a remarkable difference in her community. As she described her life story from being orphaned as a teenager in Sri Lanka with four younger siblings to look after, to her current position as the founder of an online tea business and her own NGO, waves of emotion broke onto the stage from the audience and she was interrupted several times by overwhelming applause.

Following Aidha’s philosophy, Ms. Hettige has now made it her mission to pass on her education to others. Back in Sri Lanka, several women are already learning about micro-businesses and self-confidence under Ms. Hettige’s supervision. She is basically the embodiment of what Aidha can achieve and her story shows that the difference Aidha students can make in this world is real. “In future, you will hear of me”, she concludes. “Because my vision is not only for my village, but for all countries in the world.”

Aidha is so proud of Ms. Jayaweera’s achievements and we are excited to see what’s in store for her in the future

Without doubt, another highlight of the ceremony was the stage performance by the Aidha Fabulous Fighters, Aidha’s powerful dance team, who conquered the podium and the entire audience with a super-catchy dance performance. All dressed up in black and the ever-present orange, they concluded their show with an impressive human pyramid, a real symbol of how much strength can result from collaboration, mutual support and friendship.

Aidha Fabulous Fighters who won the 1st Runner Up at the 7th FDW Day performed their dance routine perfectly!

In the second half of the ceremony, the finalists of the best business plan awards got the chance to present their projects to the audience.

Ms. Elizabeth Flores, a single mother of two from Iloilo, Philippines, used to get up early in the morning and travel from town to town to sell dried fish for the family business. Through Aidha, she is now fully independent and plans to open her own laundromat business for private and commercial customers. “Problems are like washing machines”, she says. “They knock us around and around. But in the end, we come out cleaner, brighter and better than before.” 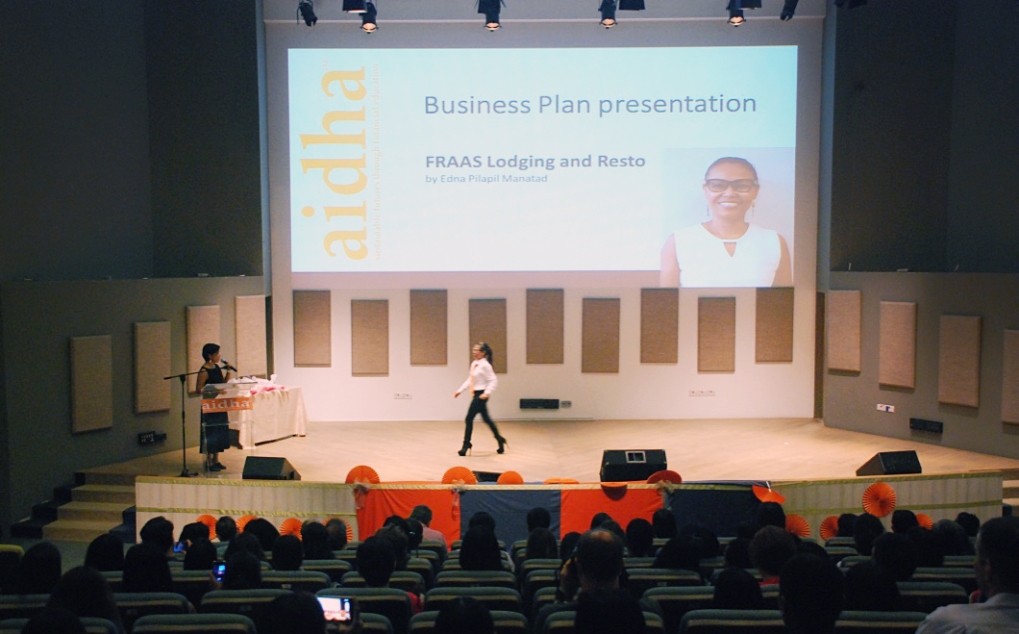 Ms. Edna Pilapil, from Cebu in the Philippines, is the eighth of eleven children and a mother of two boys. She knows well what hard work means: aged five, she was waking up at 2am in the morning to help out at a fish stall. Aged nine, she was working as a helper. Aged 13, she could not take it any longer and ran away from home. But to say it in her own words, “if you have a dream, you have a hope.” And so six years later, she was the first member of her family to graduate and go to college. In Singapore, she joined Aidha and now works tirelessly towards the opening of FRAAS Lodging and Resto, her own restaurant and bistro, planned for opening in 2019.

Ms. Rowena Gonzales, from Luzon in the Philippines, traveled abroad at a very young age to secure a better life for herself and her family. After enrolling in Aidha, she decided to follow her family’s footsteps and designed an impressive pig farming business to be launched in 2019. The pigs will grow in an environment that resembles their natural habitat and the meat will be sold at affordable prices to butchers, wholesale and retail markets all over the country.

Ms Siti Zuriyah, the other winner of the joint 2nd Runner Up presented her soy milk business

Similarly, Ms. Siti Zuriyah had a better life for her young daughter in mind when she came to Singapore from Indonesia 5 years ago. With Aidha’s help, she was able to put together a business plan to sell organic soy milk in different flavours in her home town, where diabetes and heart diseases are common. It was only after Ting and the whole audience promised to drink organic soy milk in the future that Siti left the stage with a big smile.

The business prize winners were applauded enthusiastically by their fellow students and the audience, and responded with radiant smiles and some very energetic jumping on stage.

The Business Plan winners along with Mr. Adam Lyle (far left) from one of our long-time supporter, Australian Chamber Of Commerce Singapore and Ms. Jacquelie Loh (far right), Aidha’s CEO

In the past ten years, Aidha demonstrated its inestimable value as a very special community that contributes to bringing social justice and equity to Singapore, improving the life of countless families here and abroad. Judging from the warmth and harmony at graduation, where so many graduates also brought their employers and there were also many mentors, donors and other supporters present, it is very clear that this is nothing but the beginning. To Aidha, and to the graduates of 2016, to ten years that already made history, and many more decades to come!