Movie buffs and french foodies, you’re in for a treat! Click more to read up about Aidha’s team members, Wendy Ng, Shibani Pandya and Ophelie Grollier …

Country: Singapore. I lived in Thailand for 5 years but my “Singaporeaness” will never be taken away from me…my Thai colleagues learnt Singlish when I started speaking Singlish to them!

How do you see Aidha in 10 years? It would be recognised as one of the leading charities helping foreign domestic workers in Singapore gain financial literacy and learning how to set up their own businesses. We would have a strong alumni that help each other out in their home countries. We would also have great volunteers that other charities talk about.

If you could tell one thing to your 14-year-old self, what would it be? Things are never as bad as it seems, this too shall pass. Things don’t always happen as planned but you’ll be surprised by what life has in store for you.

Best film you’ve watched: Oh my god, there is no way I can only choose one film! For old school Hong Kong flicks, anything by John Woo when he was still making movies in Hong Kong and not Hollywood. A Better Tomorrow just for how cool Chow Yun Fatt looked and a young Leslie Cheung. Wong Kar Wai is another favourite director, though I do have a soft spot for Chungking Express which perfectly captures the mood in Hong Kong before 1997. And of course Peter Chan, I really loved He’s a Woman, She’s a Man and Comrades, Almost a Love Story amongst others.

As my friends will attest, I like almost anything from Studio Ghibli, with a soft spot in particular for My Neighbour Totoro and Kiki’s Delivery Service.

For Hollywood flicks, the old school musicals like The King & I, My Fair Lady are movies I can watch over and over again.  I also like romantic comedies like Four Weddings and a Funeral, When Harry Met Sally, Clueless, the entire Before Sunrise trilogy etc, it’s a pity that Hollywood doesn’t do these flicks anymore. I also like anything by Christopher Nolan, Memento, The Batman series, The Prestige and so on. And how can I miss out Lord of the Rings, I once went for a marathon screening where they showed all three movies in the cinema, I was so sleepy by the end of it!

And of course, since I’m Singaporean after all, I need to do a plug for movies made by Singaporeans. Eating Air was the first local movie I ever saw and it was the coolest thing ever, I wanted to be on a motorbike racing down CTE! More recently, I was totally in love with Banting which is a story about a Muslim girl raised in a strict household who becomes a professional wrestler. It is such a funny movie full of heart and passion that you can’t help but fall in love with it.

Country: India. I grew up in the city of Bombay, India, a chaotic but colourful city and a stark contrast to the relatively orderly way of life in Singapore. I’ve been in Singapore for almost 10 years now and I love the food and the people. It’s definitely a plus that I don’t have to go far to find Indian food!

Worked at Aidha since: I’ve been at Aidha for almost a year now.

What do you look forward most when working at Aidha? I love going to campus and seeing the impact that our courses, workshops and other activities have on our students. The women at Aidha are so warm-hearted, caring and full of enthusiasm and energy. It feels amazing to be a part of this community.

Other than migrant workers causes, what other causes are you passionate in and why? I’m also interested in looking at how myths and stories contribute to gender-based violence. Specifically sexual violence. I think that myths and stories have a powerful impact on the way people behave and redefining these common narratives will change the way people look at gender and violence. I think my passion stems from the fact that I grew up listening to, and disliking, a lot of Hindu myths that have some elements that promote gender stereotypes, stereotypes which impacted me directly when I was growing up. I couldn’t help but wonder how the world might be a different place we if we told these stories differently.

Where are your favourite places to hang out in Singapore? I’m a bit of a hermit and you’ll probably find me at home hanging out with my cats. But I love all the parks in Singapore, greenery is hard to come by in Bombay and I love drinking it all in when I’m here in Singapore. 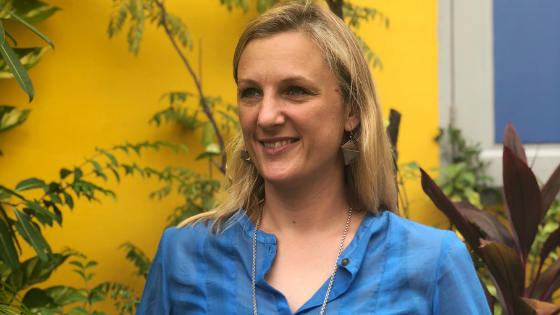 Country: France. I grew up in the surroundings of Paris and I studied Accounting and started working in Paris for a major oil company before moving to the Netherlands in 2007, where I lived for seven years. My family and I came to Singapore three years ago, after a two year period in London. My husband and I have 3 boys, all born in different countries!

Worked at Aidha since: Through a former neighbour, I got to learn about Aidha and its great mission and purpose. I started as a volunteer, early 2017, to support the Campus Manager, and applied for the Finance Manager position in mid-2018.

What’s your favourite memory at Aidha and why? It is difficult to point out a single memory and after much consideration, I would say Sports Day! I try to educate my children to give back whenever or wherever they can and they always accept a challenge. This time, they acted like zombies for one of the mini-games, it was a really fun day!

If you could have dinner with 3 people (alive or dead), who would that be and why? There are tons of inspiring figures I wish I could meet. Having to isolate three: Simone Veil comes first, a Holocaust survivor and Women rights defender; then Thomas Pesquet, a French Aerospace engineer and astronaut who recently spent 196 days in space! And finally, Frida Kahlo, Mexican artist and an icon of the feminist movement.

What are your top 3 favourite foods from your native country? Finally an easy question! In third place, a board of cheese! Smelly or not, white or blue, goat or cow. In second place, crepes, very thin pancakes which I love to devour with sugar and lemon juice. And first, Fondue with Comte, a speciality from Jura, in both France and Switzerland, I could have it every day!